May 29, Number 3 was transferred to the Maternity Pen. She ate plenty of pineapples. She looked happy and comfortable. By evening, she started that characteristic grunting sound, as if calling piglets to suckle. This could be a sign of hormonal changes.

June 7, Number 3 was given an anthelmintic (Levamisole Hcl).

June 8, Number 3’s vulva was swollen. She had this problem several times before but not this close to farrowing. I notice that she never had this problem during lactating. I wonder if this was a sign of hormonal problems or more serious health/reproductive problem. The vulva becomes swollen and there is bleeding. Often, a boil or pustule is visible which becomes enlarged and bursts, reducing in size. However, this time, if there was a boil, it was discharging from the inside. The discharge was a mix of blood and clear liquid. I often use Hexa-mide cream (Hexachlorophene Sulfanilamide) which clears the wound, swelling and irritation.

June 25, Number 3 was given her usual feed at 6AM and 4PM while she continued nest-building. She started farrowing at around 9PM. Number 3 gave birth to a small litter of 7 piglets.

June 30, Number 3 accidentally stepped on a piglet and killed it. The accident was at the trough where the ground gets wet, slippery and very hard. That area needs to be re-designed.

Observations: The small litter size is probably due to the condition of the boar. I decided to reduce the boar’s daily feed to reduce his weight. Unfortunately, this actually meant he wasn’t as strong and agile and thus kept falling off the sow during mating. When I started giving the boar the usual feed, he was much better. We didn’t need to cut piglets’ teeth. Perhaps because of the small number of piglets, although there was fighting at the teats, it wasn’t aggressive enough to upset the sow and disrupt suckling. Piglets were weaned at 35 days.

We also noticed that the fan seemed to affect the piglets. Since the fan was directed towards the center of the pen, the piglets stayed away from it and instead stayed in the creep space which was not reached by the force of the fan. So the fan seemed also a good way of guiding piglets away from certain areas, reducing the risk of laying over or crushing by the sow. 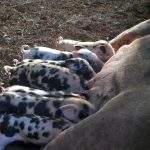 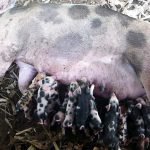 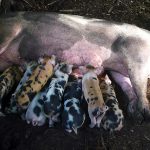 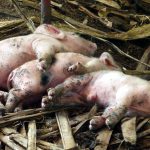 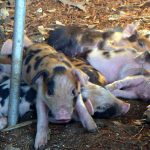 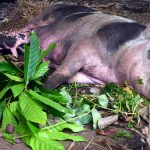