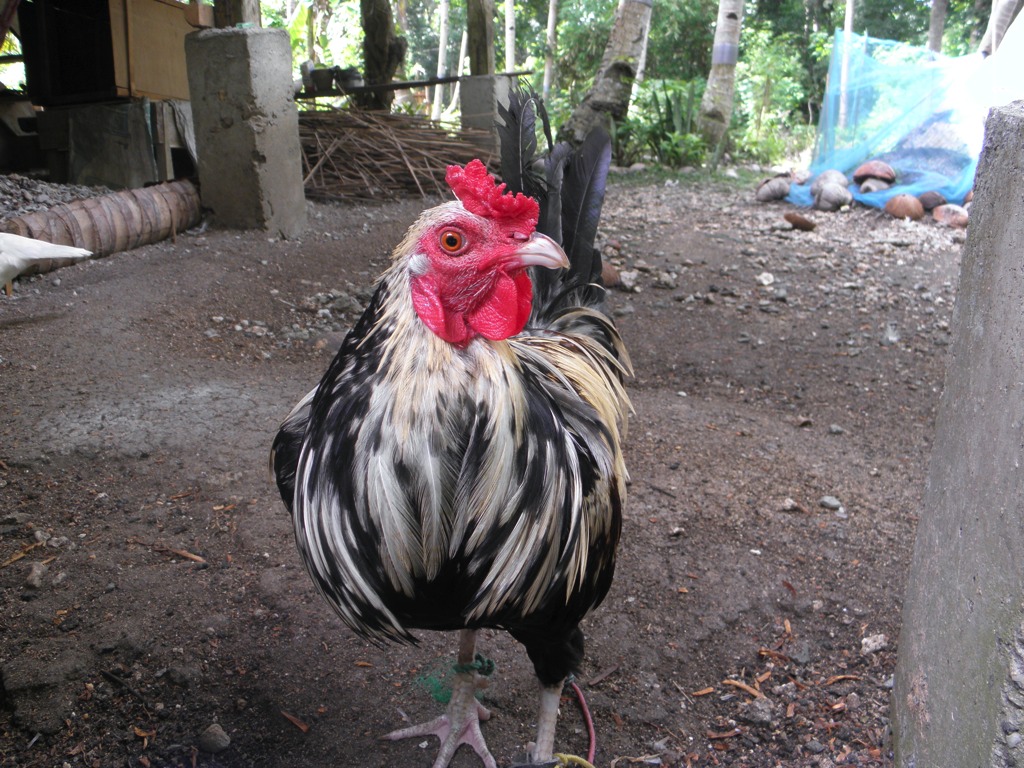 Our native chickens are free range; they are allowed to forage in the garden  – and yes, ruin the plants to Trevor’s dismay 😉 – and at night they all roost in the pig pen. That’s when we can catch them (for stew and other such dreadful things). 😉 If you want to buy some native chickens – live or dressed – as a pet, for cockfighting or to cook “Halang-Halang” or “Tinola”, then here’s the deal:

Make an appointment to visit:

We’re thinking about it! We’re so low-tech we don’t even have a vehicle. But we can hire a neighbour with a tricycle to deliver to your place or we can commute some chickens! 😉 So that’ll be extra cost. Contact us and we’ll talk about it.

How It All Started and Where It All Went

We started raising native chickens by some sort of ‘accident.’ A hen came into the garden, found a pile of nipa under the house and decided to lay her eggs there. The hen was one of about a dozen other hens roaming free-range led by a big red rooster. This was sometime early 2011.

When the eggs hatched we decided to collect the chicks and raise them ourselves. We placed the chicks, nine of them, in a box with a light bulb to keep them warm. We put in some chick booster food and water. We kept this box inside the house.

Soon enough the chicks grew bigger and we decided to build a coop for them outside. We placed this coop near the back of the house. We put a light in this coop to keep the chicks warm.

After several weeks, the chicks were big enough to go out and forage for food. We fed them commercial chicken pellets in the early morning and they went out for the day to forage for their own food, coming back for a drink around noon time, then going off again. In the late afternoon, they came back for their meal and then went back into the coop for the night.

Later, the coop became too small for them. By this time, it was possible to identify the sex of the chickens – we had five roosters and four hens. The chickens began bullying one hen and the roosters began fighting each other. The chickens also decided to roost on our balcony. This became a problem because the balcony was getting dirty with chicken poo.

We had to push the chickens away from the balcony every time they tried roosting there at night. Eventually, they found some trees in the garden which became suitable roosting places.

Another problem of having raised the chicks indoors was that the hens insisted on coming into the house to lay their eggs. We tolerated this at first, putting nesting boxes on the balcony and on the bookshelf in my studio. Soon, we had plenty of chicks. But we also became infested with chicken mites. On top of that, we lost all of the five roosters. It is typical here that roosters get stolen once they mature, often to be sold as fighting cocks if not cooked in a stew.

Because of the numerous problems of mites, chickens insisting on laying eggs in the house and roosters disappearing, we decided to build a chicken run/house. This was an area in the garden that had a high bamboo fence, a coop inside, and a roofed section for hens to lay their eggs.

Later, we also built another chicken coop for a new clutch of chicks that had been abandoned by their mother. We placed this coop in the garden. What was to result in these attempts to coop up the chickens was a disaster.

Although we talked to people here about native chickens, there was the tendency to think in terms of only either total free range on a 5-hectare farm or the battery chicken system in industrial farming. Trevor also originally wanted a chicken house without walls, but just a roof and roosting places. Perhaps that would have been a much better idea.

What we are learning now is finding a middle-ground between those two systems – between the free range and the confined. Most crucial here was culling, which we learned through our own mistakes, in ensuring a healthy chicken population. Of course, we also had to identify the optimum chicken population given our small space.

There was a time when we had over 50 chickens in that chicken house/run. Now, keeping the chickens free range, we have three roosters (tied up to keep them from getting stolen and from killing each other), three egg-laying hens, four pullets and some fifteen chicks from the three hens. It was a mistake letting three hens have chicks all a the same time. The hens fight and this can result to death of chicks due to crushing and pecking. The ideal – given our limited space – is (1) keep two older rooster and one new rooster to replace the older ones later; (2) keep three to four hens; (3) have one clutch of chicks only one at a time; and (4) collect the eggs and cull the chicks before they fully mature.

The chickens now interact with ducks which we introduced last year (2014). We also don’t have the problem of chickens going into the house anymore because we no longer rear them inside the house. The mites problem also seem to have gone down considerably even if some of the chickens stay under the house during the day. I suspected that this might be because of the ducks that also stay under the house. The ducks like water and the (mildly) wet environment discourage the spread of mites.

In some places where we put nesting baskets, particularly under the nipa roof of the old pig pen, there is often severe mite infestation. We are building a new pig pen with a nipa roof and will no longer put the nesting baskets there. It seems much better if the hens layed their eggs under the house on sandy soil, protected by pieces of wood along the sides. We’ve had one hen lay eggs this way and she never had the mites. There is a also a type of weed, the holy basil, that can be placed in the nests to repel mites.

I have asked Bebe to demolish the chicken house/run so that there can be some space to extend the pig pen. At the moment the pig stays under the house at night and then goes out into the garden next during the day. The pig’s movement is restrained to keep her from destroying the garden. I am hoping that she can have more freedom of movement in the new pig pen.

Anyway, these are many lessons learned in raising native chickens. And there are always new things to learn each day when I interact with the animals. I’m keeping note of such lessons here, most of them lessons in a hassle-free way of keeping animals for food.