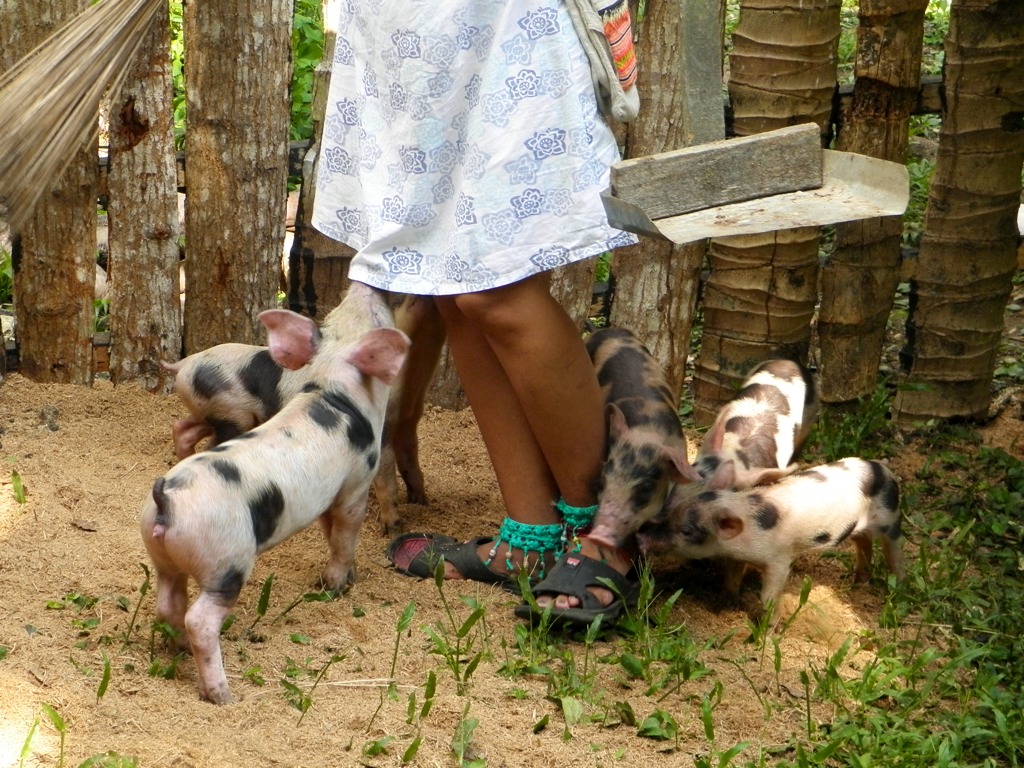 Like a number of people in the village of San Roque, we like to take care of a pig or two to fatten. The quality of meat from home-grown backyard pigs is enormously better than those from commercial factory farmed pigs. I have noticed that pork bought at supermarkets are very soft and tasteless. There is also often a tendency for the meat to exude a large amount of liquid and shrink considerably when it is cooked. I have observed this same phenomenon when cooking bacon bought from the supermarket. This is very frustrating.

Below is a gallery of photos of some of the pigs that we have raised in our backyard.

To celebrate Baclayon Town Fiesta last December 8, 2010, our first fiesta at home, Trevor gave Penny some money to buy a piglet and take care of it until it became big and fat. During that time, it would cost some 1,500 to 2,000 pesos to buy a piglet at the Public Market. There, every Market Day (Wednesday), pigs and goats are brought in from various places in Bohol. The piglets are placed inside sacks, so when one buys a piglet, one doesn’t really get the see the whole piglet. It’s quite a lottery. Thus the English colloquialism, “never buy a pig in a poke.” So, when one buys a piglet in a sack, one should take the effort to know who is selling the piglet, and then get a ‘warranty’ in case the piglet becomes ill. The pig can be returned and replaced with a new one. This ‘warranty’ is usually good for one week, that is, until the next Market Day.

Penny was quite lucky with this pig. She got it in June, and it grew to reasonable size in about 6 months. The typical scheme here is that someone provides the money to buy the piglet, and the caretaker feeds and looks after until it reaches butcher weight, maybe from 80-100 kilograms. When the pig is sold the person who invested in the purchase of the piglet gets a third share. Normally, that’s about the price of the piglet plus 500 to 1,000 pesos. It’s not a big profit. Penny doesn’t get a big profit either, from 1,000 to 2,000 pesos, although that also depends on how resourceful she is in getting food for the pig. One can buy commercial pig food and supplement that with table scraps, gabi (taro) roots and leaves, chopped up young banana trunks, and various other vegetation.

This third-share also applies to sows raised for breeding. The investor gets a third of the sale of piglets, and the caretaker gets two-thirds. I also learned that with such simple pig schemes, the profit is not that important. What seems more important is getting a large lump sum after the sale of a pig, whether it’s a loss, break even or a small profit. Of course, there is also the enjoyment of looking after a pig which is itself priceless.

So, for fiesta, we bought this pig from Penny, less our third share. At that time, a pig’s live weight costs from 90 to 100 pesos. Depending on demand, that can now get up to 115 to 118 pesos, maybe more. One might get more profit if one slaughtered the pig and sold the meat. However, it isn’t easy selling meat around here; one needs to be patient and know who to sell to. Most people buy on credit and it can take a long time before one gets paid, if at all. Perhaps the best situation is to keep two backyard pigs – one for one’s own food and the other to sell. They say three pigs is even better.

Early 2011, we got our own pig, a native pig, from the market. Philippine native pigs are known to be hardy and easy to raise because they can eat all sorts of vegetation. However, after several months, our native pig died.

The day before the pig died I noticed that its urine was tinged with blood. When Bebe cut open the pig after it died, he found a tumour growing in its urinary tract. Such problems may be genetic or due to in-breeding. We have also suspected problems with water because the pig has been finding its way in areas in the garden where grey water from the house flows through. It is possible that the pig was affected by this water over several months. So now we have laid down pipes under the ground and into a makeshift filtering tank (resembling a septic tank) so no animals may access this grey water.

Update: In June 2018, we found a way to put our greywater to much better use! See our DIY Wastewater Treatment!

Update: In June and September-October 2017, we rebuilt the pigpens to allow the pigs more room and ease of maintenance. See Natural Housing For Pigs and A Better Pig Accommodation.

Fattening Pigs for Our Own Consumption

The Wonders and Benefits of Home-Grown Meat and Home-Made Ham, Bacon and Sausages

Update January 2019: While we try to manage our pigs as independently as possible, we have established a very good relationship with an animal technician from Breeder’s Agrivet. We are also keeping ties with the Bohol Office of the Provincial Veterinarian.

Then We Tried Pig Breeding

It wasn’t easy! Remember the little spotted piglet? Well she grew to be about 150 kilos and in January 13, 2015, we contracted the services of Artificial Insemination from a fellow in Corella. He was the only person we knew in Bohol who had a duroc pig – yes, we wanted a duroc pig! Then in May 9, our sow gave birth to 12 piglets, all on her own without any help from us.

The next day we got help to clip the piglets’ needle teeth and our sow received a dose of intramascular antibiotics. The piglets seemed to be suckling with no problems but that was when our problems started. Within hours, the sow stopped producing milk and we had to rear the piglets by hand. By then we had only 5 piglets left (2 were born dead, 2 got crushed by the mother, and 3 more died when the sow couldn’t produce any milk). It was very hard work which seemed to go well until after two weeks, the piglets started seriously scouring (diarrhoea) and one by one they died and we were left with one, a spotty brown pig we call Bootleg. Our ordeal had not ended there. At two months, we noticed that Bootleg’s prepuce started getting bigger. It was umbilical hernia.

Update: Bootleg died in September 2016. His son, Pinky Boar, is now the biggest, happiest and most good-looking boar in the village! 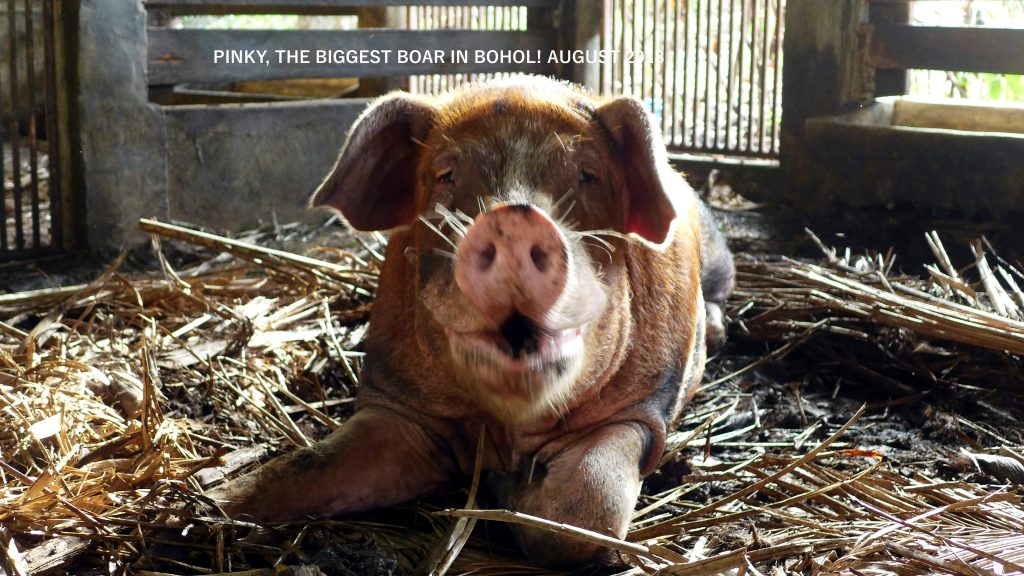 Some pigs are obsessive with a behaviour called “belly nosing.” We were able to manage this obsession by giving them a ball (Trevor’s fantastic idea!). Here’s a video showing how a pig can enjoy playing with a ball.

Learn More About Our Pigs: